Ahh, now we are well and truly into the world of subjectivity. However, considering a range of currently popular manufacturers in mobile self-operated P.A., there are some key facts we should highlight.

A quick look in the manuals or technical specification sheets of most systems will reveal on axis frequency responses. The are problems with giving to much consideration towards these charts however. In a sound studio or a living room, the effective listening area need only be the size of a head, or a few heads at most. Although we’re not concerned with enormous venues in the context of this guide, (250 people at most), this still means that there’s a fair chance many of our listeners will be off axis, (away from the centre line extending forward of the loudspeaker). An on axis frequency response tells us nothing of the level balance between frequencies when we’re listening off axis.

What’s more, although comparison of these figures between various system types may seem tempting, caution must be applied. Consider Figure 1 and Figure 2. Putting aside that there’s no standardised resolution of chart intervals in the presentation of frequency response between manufactures, there’s also variation in the conditions which such measurements were taken. Figure 1 gives us some indication of how hard the loudspeaker was being driven; 104dBSPL at 90Hz offers a context reasonably familiar to people who operate P.A. regularly. Regarding Figure 2 however, we’ve no idea as to what drive level these results refer: and you can be damn sure that the efficiently of loudspeaker components can be dramatically effected by how hard we work them. 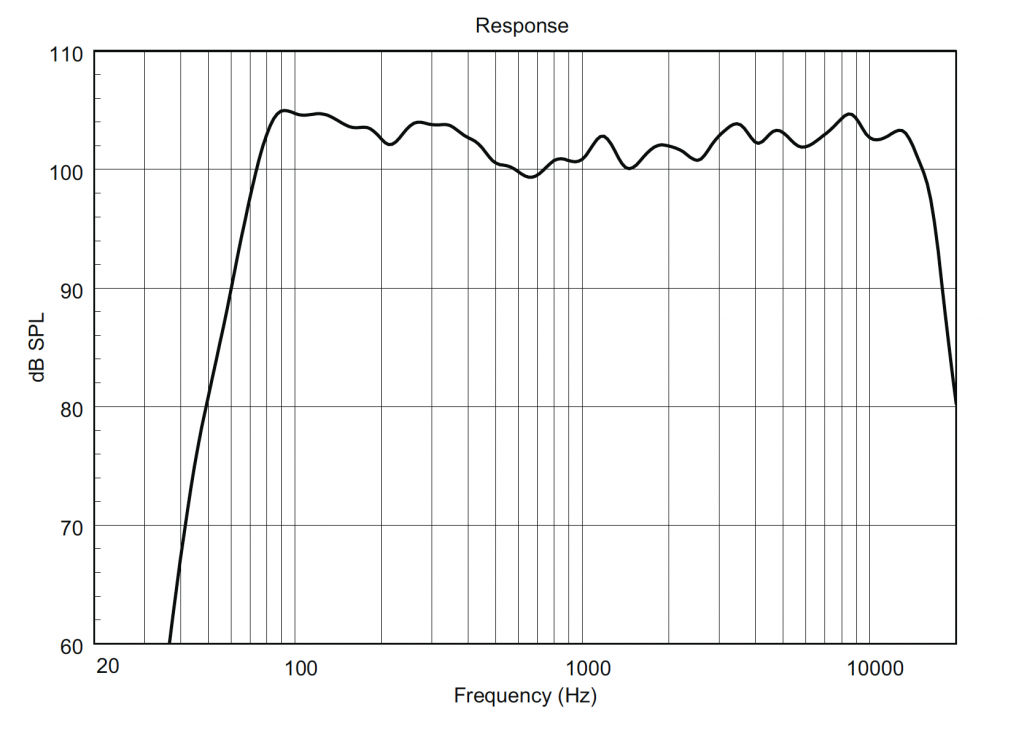 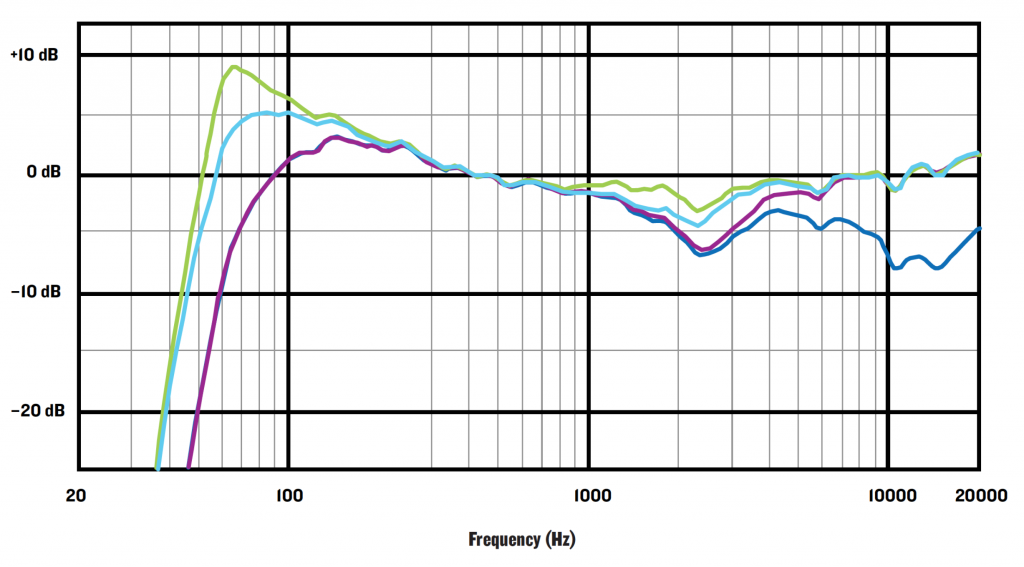 Although it takes much more getting our heads around, we may become better informed about the performance of loudspeaker systems by comparing off axis, to on axis frequency response. The greater the difference in terms of level over frequency between the two, then the more variation between what listeners located around different part of a venue, hear.

What Is A Good Frequency Response Anyway?

In writing the Sound Reinforcement Handbook back in 1989, Davis & Jones put it well: ‘good must be judged in the context of the application’. That still, (and probably always will), stands.

At an average gig which we play, how significant is it that a highly engineered (more expensive!) system, has an ability to maintain nominal dispersion control* in the vertical plane, 250Hz lower than a system which can be purchased for many thousands of pounds less? Granted, these narrow improvements to the control of frequency can accumulate to make a difference. During experiments carried out between a highly engineered (the d&b Audiotechnik Y7P) and a more affordable mass-market system (the Mackie SRM450v3) ahead of writing, it was possible to measure and indeed hear off axis frequency improvements made by the more expensive system, which exerted greater dispersion control over a wider band of frequencies. However…do or would our audiences notice the difference?

* Nominal dispersion control in this case means less than 6dB variation within 45° above and below the loudspeaker.

General frequency requirements for the low end of P.A. during reinforcement of music events, tends to vary between 30Hz and 50Hz. This however is the difference between using sub woofers or not. A quick look at the frequency range of an average two-way point source loudspeaker system may suggest that they have sufficient low frequency output at 50Hz. But again be aware, there’s an ‘important difference between frequency response and maximum output capability’, Stark (2004). Moving large low frequency drivers to produce high SPL takes power: dedicated enclosures designed specifically for the job, i.e. sub woofers, allow us to lighten the low frequency workload of our mid – top cabinets*. For that reason, a number of colleagues consulted in writing this piece, agreed that they often choose to use their sub woofers for the production of greater broadband SPL, as oppose to a specific requirement for more low end.

*Mid-top cabinet – a loudspeaker whose workload is dedicated to producing mid and high frequencies.