Skip to content
Home » The Relevance Of Stereo In Mobile P.A.

The Relevance Of Stereo In Mobile P.A.

The following are some considerations towards the distance spacing between left and right main loudspeakers, and occasions where mono (or a single-central loudspeaker unit) may be appropriate.

First up, what what are the advantages to setting up a left – right pair of loudspeakers?

A quick clarification on use of the term stereo...

Not that I wish to be to pernickety but to clarity, two loudspeaker left and right of the stage (or performance area) doesn’t necessarily mean a stereo configuration. For stereo, we’d have to be sending a separate left signal to the front of house, (F.O.H) left loudspeaker, and a separate right signal to F.O.H right, (and have that separation on the mixer or console as well). Some of the argument for having left – right loudspeakers pertains to stereo music, while others have more practical consideration.

– Compelling research exists which concludes that human enjoyment in listening to music is advanced when sound arrives from a reasonably wide horizontal plane. What’s more, this typically matches the visual reality of a band spread across a stage. From the perspective of the person who is sound mixing the event, (which in the context of this guide, is also a performer), left – right separated loudspeakers offer a convenient way of putting width distance between the instruments.

– Fail-safe. Particularly with actively amplified (self-powering) loudspeakers, having a spatially divided (left-right) main system means if one of the units were to fail, the performance could potentially continue.

– When using a pair, one speaker can be placed either side of the stage in order not obscure the view of the performance. A central cluster of (mono) loudspeakers are useful in theater for speech, and that’s appropriate because they can be flown from rigging points high above the stage. In our mobile P.A. context, unless we’re using an installed system, a central mono system would likely interrupt line of sight to the performance.

– A single (mono) system may not be capable of delivering great enough SPL in some of the venues within which we work: a second unit may therefore be required.

When it comes to speech however…

–  Acoustic human speech is a mono source, (putting reverb and delay affects added to vocals to one side that is). A single central source can therefore create a strong visual link between the person speaking (or singing) and the perceived origin of the sound.

– There’s a strong argument for use of a mono system in terms of achieving the most coherent speech reinforcement. A great deal of destructive phase interference exists between a stage left – stage right pair of loudspeakers. The video below gives an example of this phase interference (also known as combing filtering), when the delays in arrival times of sound from two or more speakers, change.

The phase sweep itself isn’t a concern…not that many people walk directly across the front of the system and bring it up as an issue. But what the video serve to demonstrate, is that at locations between two left – right loudspeakers, there is variation in the arrival times of (what is essentially the same) sound from each, which causes narrow band frequency filtering. In this case, the mono source could be described as being the more phase coherent. Overall though, does that make a significant difference to sound quality in our context?…Well…it’s a complicated topic…but probably. Have a look at the following video. It is an A- B listening test between the same two systems as in the previous video. However this time, using a speech signal and a constant (central) microphone position. Both systems were;

– Have no EQ applied to them.

On which system does speech sound the clearest?

Further analysis if you're up for it...

First of all, you may agree that some adjustments to the EQ of the Mackie SRM450V3 system (as explained here) would lead to clarity improvement.

And….of course there are many other reasons why one system may sound clearer than another system: and that’s even before we get to venue specific aspects. Phase coherence is just one of the contributing factors. But do note how the phase sweep above was pronounced in higher frequencies. There is a technical reason for this relating to shorter wavelengths, which we won’t go into right now. Nevertheless, the argument made by some P.A. system designers for minimising overlap of the mid and high frequency dispersion (cones) extending forward from two displaced loudspeakers, does make some sense, in an effort to minimise this comb filtering business.

For now, on with some other points in favour of using a single-central system….

– Only listener positions which are central between the left and right loudspeakers would receive the stereo balance made by the band (or individual performer) on the mixer. Often, the distance spacing between left – right loudspeakers means that the stereo mix effectively collapses down to the loudspeaker closest to the listener.

– Events and performance types exist which do not require SPL levels which are greater than a single mono source can deliver. A soloist or duo performing early doors at a wedding or perhaps a DJ at a christening would be examples of such instances. Added to which, 25% of performer / P.A. operator respondents, (to research conducted by this project), said they frequently face a challenge of limited space in venues. Considering these points, a wide dispersion, single instance source, might be a practical and suitable solution. Figure 1 shows one such system positioned along the length axis of an oblong venue. Given its 195° nominal dispersion, this makes sense for achieving both reasonably even coverage across wide listening positions, and minimizing sound interaction with walls. 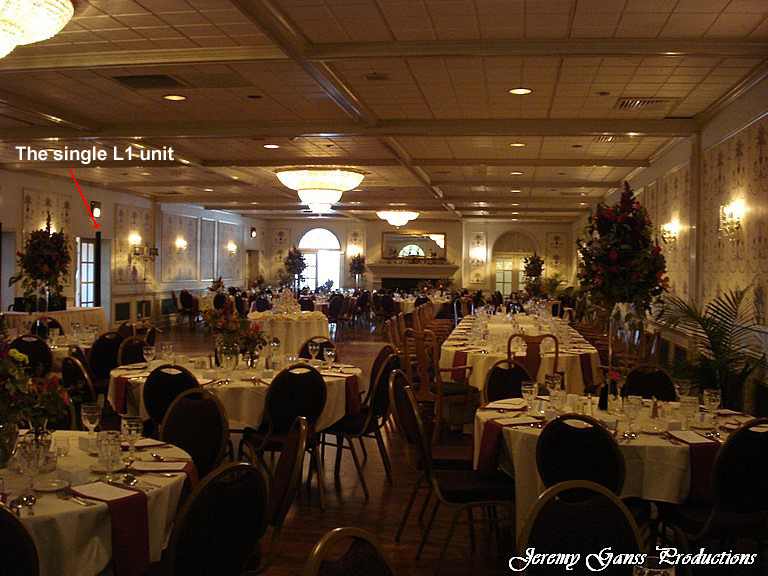 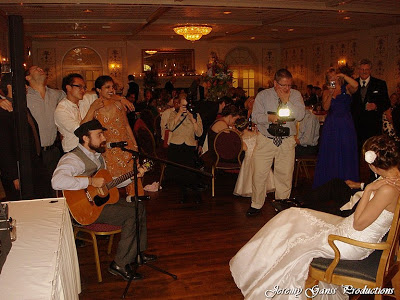 What Distance Apart (In The Horizontal Plane) Should Left – Right Loudspeakers Be Positioned?

Inherently, this is linked to the venue’s dimensions. Sometimes, there’s not a great deal of choice in how far apart displaced loudspeakers are positioned, due to space restrictions. The decision on spacing between a pair of left – right F.O.H loudspeakers should definitely involve consideration to the loudspeaker’s nominal dispersion’s. Consider the diagram below;

Figure 2  – Horizontal splay of loudspeakers based on their nominal dispersions

Figure 2 shows us that splaying loudspeaker’s outwards, in order to avoid the negative effects of phase cancellation between the left and right side (discussed earlier), may be a trade-off with intelligibility. The narrow space in Figure 2 means that there needs to be more overlap between the two loudspeakers, else strong reflections may be a bigger issue. Care should be taken in a long narrow hall to avoid directing acoustic energy towards the walls, as discussed here.

An additional consideration towards the distance between left-right loudspeakers is discussed in this video, pertaining to preservation our our ears!