1. What Causes Feedback?
2. The Slightly More Technical Bit… For Those Who Want It – Why Some Frequencies Feedback More Than Others
3. Ways To Prevent Feedback: Recommended Solutions

How often do we see this happen?…

…A guest presenter at a function ends up delivering a speech in front of the main P.A. system. According to research under taken ahead of writing, around 67% of respondents said it was possibly or likely to occur. Limited space within which to set up was also a theme from the research, and I would tend to agree, this often leads to a guest presenter (or the act themselves) out in front, making methods for optimising gain before feedback more critical.

Let’s start somewhere simple with this;

Even if you already feel that you know the answer to the above question, this section is well worth a look. Aside from the most obvious part to the definition of feedback; where audio get’s stuck in a loop, there’s also a profound point on phase which can easily be overlooked… 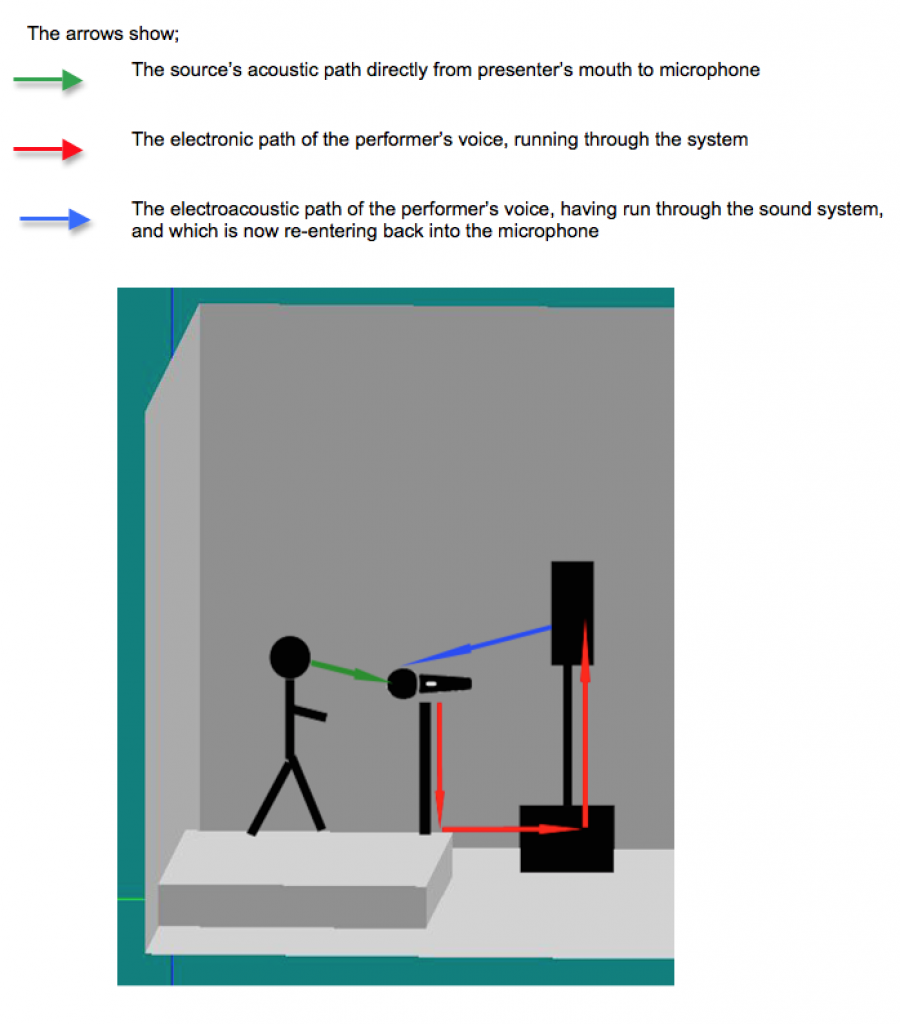 The term used to evaluate the resilience of a system to feedback, is gain before feedback.

The Slightly More Technical Bit… For Those Who Want It

Depending on if you’ve time for it, you may be interested in why some frequencies feedback more than others. If not, feel very welcome to skip down to the section on recommended solutions.

Why some frequencies feedback more than others - phase relationship and room resonance...

Technically, feedback only occurs when the waveform arriving back at the microphone, (from the electroacoustic path), is in phase with the acoustic signal arriving at microphone, directly from the voice. Phase is however frequency dependant. There will be a delay between the direct sound, and the sound returning from the loudspeaker and reentering microphone. Why? Propagation of sound through the air takes time; approximately 1milliseconds (ms) per foot. If a loudspeaker is 12feet away from the microphone therefore, it will take 12ms to reach the microphone. Where as, the person speaking into the microphone may be have their mouth just 6 inches away from the microphone. The difference between the two signals in terms of arrival time is therefore approximately 11.5ms. This result is that where these two signals meet, some frequencies will be in phase such that they add (their gain is increased) and others will cancel (their gain is attenuated). The frequencies who’s gains are increased, will be accentuated. It is for this reason that feedback presents itself as a steep narrow rise at specific frequencies, as seen in Figure3

Let’s consider a gambling analogy (McCarthy, 2006 Loc.2165). Increasing the gain of the microphone can be compared to increasing the ‘stakes’; (i.e. that when the system begins to feedback, the ringing is louder!) But it is the degree to which the direct and re reentry signals are in phase with each other, that ultimately determines at which frequencies the feedback becomes an audible problem. This explains why some microphone positions which are closer to a loudspeaker, (which we might expect to be more feedback prone) sometimes perform okay, where as other locations a little further away feedback unexpectedly.

The dimensions of a room and its reverberation characteristics influence the frequency response of a loudspeaker system. The physics which explain why are beyond the scope of this guide, but for operational use, here’s what you need to know: If a room accentuates a certain group of frequencies and feedback is most prone at specific frequencies which resides within that group, the gain achievable before feedback will be considerably reduced. It is recommended therefore that adjustments are made to the overall system’s response given consideration to the room (explained here), before further subtractive EQ is applied to reduce the gain of the most prone feedback frequencies.

More so than anything else, avoidance of feedback requires time ahead of the gig. Even automatic feedback suppressors require the user to run a set up wizard, which isn’t fun for guests to listen to once they’ve arrived.

Even with use of the best tools and knowledge, avoiding feedback in the most challenging of situations, needs time dedicated exclusively to it before a gig.

Working Behind The F.O.H P.A.

In an ideal context, unidirectional microphones would be used behind the front of house (F.O.H) P.A. system, where the least sensitive side of the microphone, (its back) is facing the rear of the loudspeakers, (this off-axis position experiences less mid-high frequency). In mobile sound entertainment however, it’s fairly commonplace for performers or guest speakers to be in front of the P.A. system; perhaps either due to limited space, or because audience interaction is a part of the act. So here are some proven techniques to achieve the greatest possible gain before feedback, including for when the microphone is used front of the P.A.

Figure 4 shows the difference between a cardioid and super-cardioid pick up pattern.

The theory goes that with a narrower pick up, a super-cardioid microphone should rejection more acoustic energy to the side, which should in turn reduce the reentry path returning from the P.A. system, (when the microphone is used between a pair of left-right loudspeakers. However, during research for this guide, measurements were made to investigate which factors improved gain before feedback the most. In two of the case study venues, a microphone with a cardioid pick up pattern (a wireless Shure SM58) allowed for greater gain before feedback than a super-cardioid microphone, (a Sennheiser EW145). The advantage of a narrower pick up pattern can be overruled by a frequency response that accentuates particular frequencies which are feeding back. Due to the complex nature of phase variation, the simple lesson to be taken from this is that, (if you have the luxury of having more than one microphone to try), if you’re disappointed with the gain before feedback which oyu can achieve with your first choice of microphone, try another microphone before anything else; it can make a surprising amount of difference. 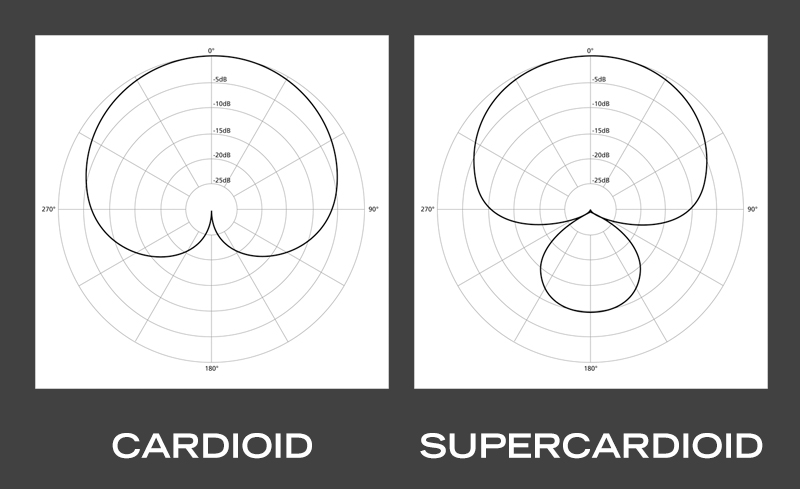 Decrease The Distance Between The Source And The Microphone

Increase The Distance Between The Source And The Loudspeaker

Conversely by decreasing the level of the returning and reentering signal, greater gain before feedback is possible. This can be achieved by increasing the distance that the loudspeakers are away from the microphone. However, there’s a circumstance which counteracts this advantage, described in the next point;

Avoid Positioning In The Sweet Spot

Figure 5A and 5B compare the distance relationship between two basic set up options within the same venue. These two positions were used during an experiment conducted by this project, in order to ascertain which allowed for the greatest gain before feedback. The microphone position was kept constant, while the position of the P.A. was adjusted. The hypothesis was that increasing the distance between the loudspeaker system and the microphone, (as in Figure 5A), would result in considerably greater gain before feedback. However this was not overwhelmingly the case, and Figure 5A achieved only 1.5dB greater gain before feedback at best. In Figure 5A, the microphone is located in the overlapped electroacoustic crossover, which can also be referred to as being within the coupling zone (McCarthy, 2008). This location is central between the two displaced loudspeakers, at the point where the nominal dispersions (cones of dispersion within which there’s less than 6dB of level variation), meet at equal level and phase (across a wide bandwidth of mid and high frequencies at least). At this point there is equal distance and equal level between loudspeakers; a climate within which feedback thrives. Although in Figure5B the loudspeakers were closer to the microphone, leading to a greater level of sound reentering the microphone from the P.A. system, this was counteracted by the microphone now being in the gapped crossover.   This is an area outside the nominal dispersion of the loudspeaker’s the mid and HF frequency components (represented by the red cones). 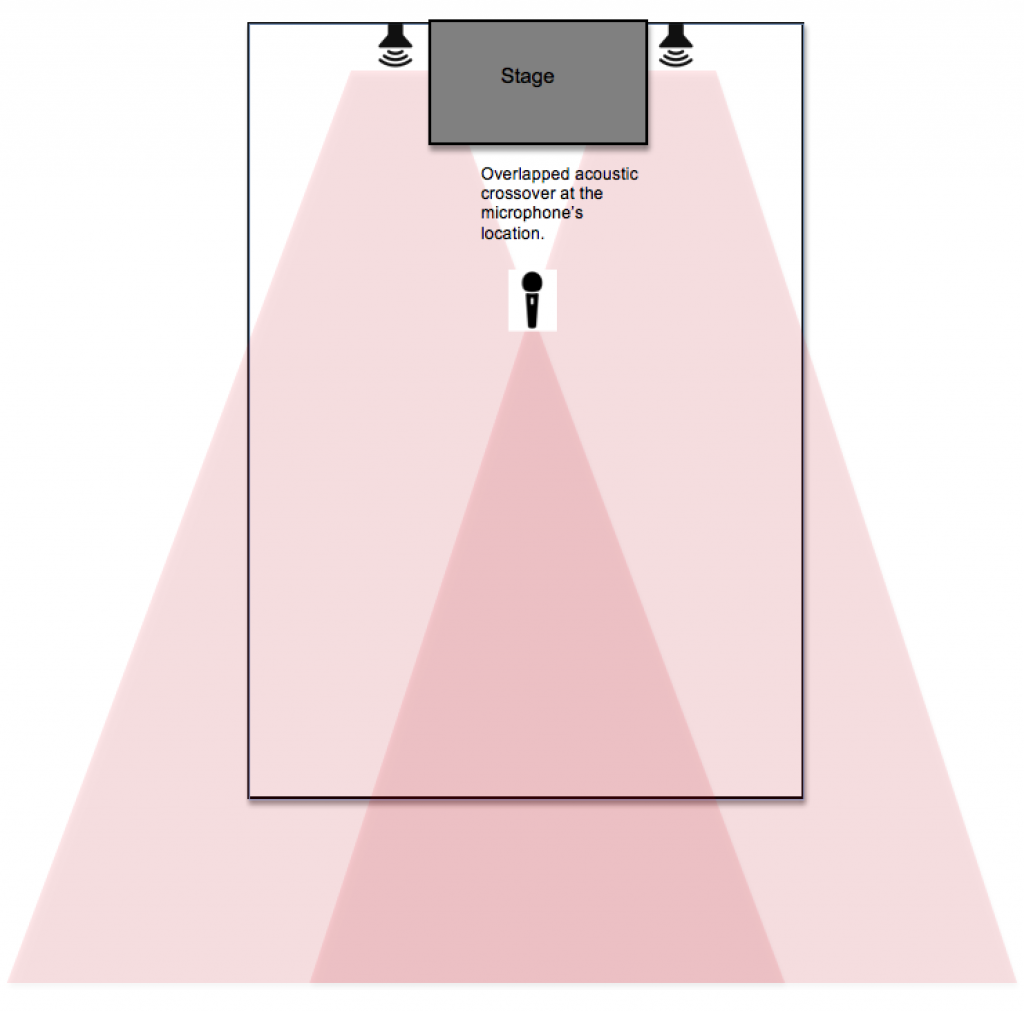 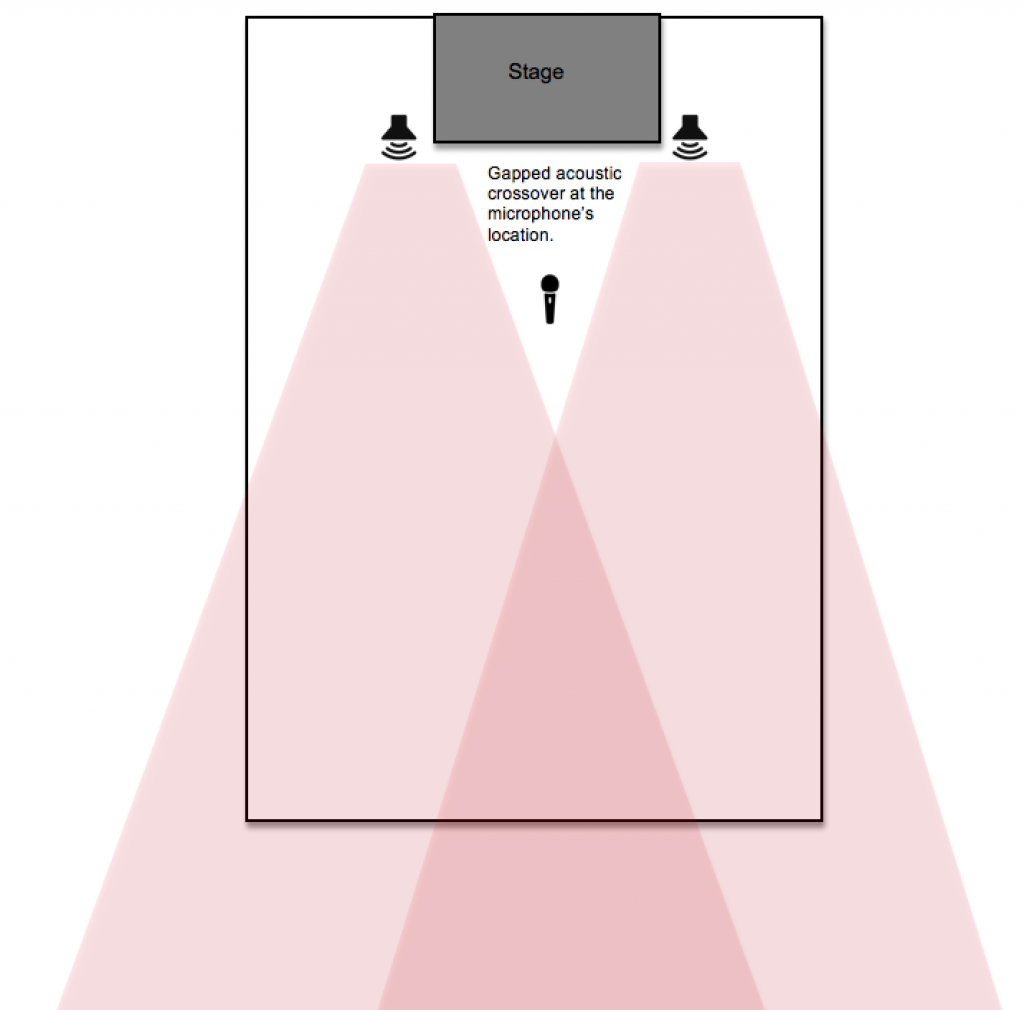 Gain Shading When Using A Microphone In Front Of The P.A.

The head is an effective absorber of sound. By recommending that a guest who is using a microphone, positions their head between the P.A. and the microphone, will increase gain before feedback. 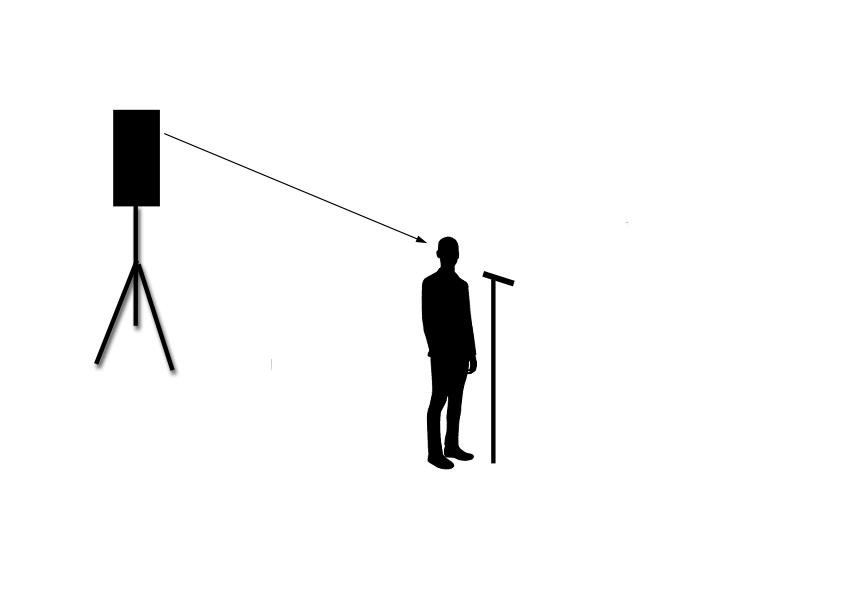 An earlier section looked at how the human is an affective absorber of high-mid and high frequency.

If a microphone needs to be used in front of the P.A. system, there should be an acceptance that gain before feedback will be limited; even more so if the microphone is needed to be roaming. There’s a limit to the amount of equalization (E.Q) which we can apply before the intelligibility of the microphone is reduced. If the cutting of frequency is too broad and too deep, we could end up wanting to bring the overall gain of the microphone back up so that people can understand what’s being said. When EQing to prevent feedback, the aim is to identify those frequencies most likely to feedback first and reduce their gain. The more specific we are in identifying and attenuating these frequencies, the greater the gain before feedback we can achieve.

If it doesn’t sound too tedious, I’d strongly recommend having a play at this guess the frequency game provided by Wavelength Media on Media College.com. It improved the speed at which I can detect which frequency is about to feedback no end.

Click here to find out more about why some of the EQ's that you find on mixers are of limited use when combating feedback...

Channel strip type (parametric and semi parametric) EQ’s common on mixers, typically have a fixed bandwidth (range of frequencies over which they are attenuating, also known as Q). They are not ideal in the prevention of feedback, as they’re usually designed to effect a range of frequencies, when what we need here, is a narrow notch cut. A graphic EQ is therefore much more effective in the identification and elimination of the most prominent feedback frequencies. Having a piece of digital speaker management hardware in your system makes sense. This type of hardware, typically includes a 1/3 octave graphic equalizer (along with other key digital signal processing). Offering wifi control via phone or tablet, such systems make great sense for performers setting up on their own. You can take your mobile device, stand in the location which you’re microphone will be in, and make the adjustment from there.

It’s not recommended that loudspeakers be splayed outward towards walls in an attempt to avoid feedback indoors. This figure exemplifies how such a splay increases acoustic power coming into contact with the walls of a venue, and reduces the intelligibility of a speech signal. In the majority of halls, reducing the gain of the microphone 3-6dB such that the system isn’t on the edge of feedback, will result in a more intelligible signal than splaying loudspeakers outwards.

The video below walks through using a graphic EQ to tackle prominent feedback frequencies.